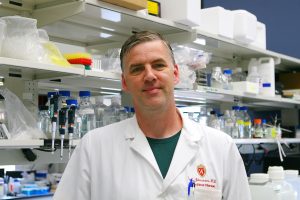 Associate Professor of Medicine and Oncology

Research in Dr. Eric Johannsen’s laboratory focuses on the role of Epstein-Barr virus (EBV) nuclear proteins in the pathogenesis of EBV-associated malignancies and the virus lifecycle. To establish lifelong latency in humans, EBV manipulates growth and survival signaling pathways of B lymphocytes, converting them into long-lived memory B cells.  Differentiation of memory B cells into plasma cells reactivates the latent virus, which can then spread to other cells and other hosts.  The Johannsen laboratory has used ChIP-seq, RNA-seq and other approaches to define how the EBV nuclear antigen (EBNA) transcription factors transform resting B lymphocytes into proliferating lymphoblasts.  Dr. Johannsen and his trainees previously discovered that LF2, an EBV gene of unknown function, is a potent negative regulator of replication.  Recently his lab has helped define why a class of EBV genes (called late genes) depend upon viral DNA replication for their expression.  His predoc VTG trainee, Reza Djavadian, reported in PLoS Pathogens (PMC4922670) that a viral pre-initiation complex (vPIC) requires a DNA origin of lytic replication in cis to mediate late gene expression. Reza went on to demonstrate by single cell FISH that late mRNAs indeed arise from DNA replication factories and published a second PLoS Pathogens paper (PMC6005644) that used CAGE-seq to define the kinetics of all EBV transcripts. He was first author on both papers. Reza is now pursuing a postdoc in Dr. Ahlquist’s lab and has plans to apply to medical school. Dr. Johannsen teaches a graduate course entitled Oncology 675: Bioinformatics for Biologists and helps teach Oncology 703: Carcinogenesis and Tumor Cell Biology, a graduate-level cancer biology course. He collaborates with Drs. Kenney, Gumperz, Sugden, Mertz, and Lambert and helps other virologists analyze and interpret their next generation seq. data. His lab is supported by the Tumor Virology P01 (Projects 3 and 5, and leader of the Virus Core), and he is a co-investigator on an R01 with Dr. Kenney.