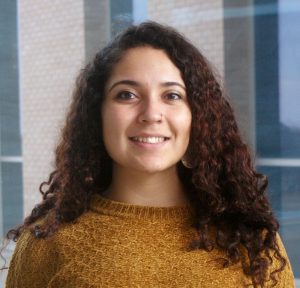 Research Title:  Determining the Role of Hepatitis B Virus Viral Proteins, Core and P, in cccDNA Persistence and Genome Maintenance

Research Description: Although the discovery of a vaccine against Hepatitis B virus has contributed to a steady decline in the number of cases since the 1980’s. Unfortunately, an estimate 800,000 deaths occurred in 2015 due to HBV-related disease. Previous studies have shown that nascent nucleocapsids accumulate in the cytoplasm before surface proteins are completely processed. During this accumulation, a subset of nucleocapsids are trafficked to the nucleus where additional cccDNA can be established, contributing to persistent infection. Curiously, core proteins have been identified to harbor nuclear localization signals (NLS) and phosphorylation sites, which undergo conformational changes as the HBV genome matures from pgRNA to rcDNA. Sofia hypothesizes that nascent nucleocapsids – composed of core, P protein, and rcDNA – undergo dynamic transitions from the cytoplasm and to the nucleus in a temporal manner. Sofia’s research will focus on using single-molecule detection systems to subcellular localize HBV Pol and Core proteins during replication and packaging of viral genome. To fully characterize these dynamics for the first time over the course of infection, Sofia will localize core and P proteins using a combination of high resolution live and fixed light microscopy techniques including indirect immunofluorescence and functional Core and P derivatives bearing genetic tags that include split GFP, SNAP/HALO-tag, and SunTag. The covalently closed circular DNA (cccDNA) and pregenomic RNAs (pgRNA) will be detected using Stellaris single-molecule fluorescence in situ hybridization (FISH) and branched DNA (bDNA) FISH techniques. The use of these single-molecules detection approaches will allow for the direct visualization and identification of subcellular localization sites during various stages of the viral replication cycle.