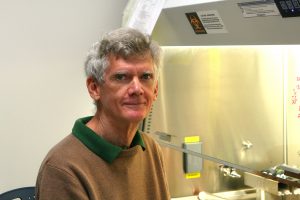 Dr. Sugden studies both Epstein-Barr Virus (EBV) and Kaposi’s Sarcoma Herpesvirus (KSHV) to understand their contributions to human cancers and to develop rational means to treat those cancers.  He and his colleagues have developed new approaches to visualize EBV and KSHV genomes in live cells allowing them to be tracked during latency and followed during their amplification in the viral lytic phase. They have characterized the strikingly different modes by which these two herpesviruses partition their genomes in latently infected cells, finding that EBV partitions its genomes quasi-faithfully while KSHV does so randomly by, in part, clustering its genomes. Dr. Sugden has also examined the functions of EBV’s microRNAs to uncover their roles in inhibiting both CD4- and CD8-mediated responses to B-cells newly infected with EBV.  These recent findings were made working with postdoctoral fellows who are now faculty members in Taipei, Taiwan, and Sapporo, Japan as well as in collaboration with a former postdoctoral fellow who is a professor in Munich. Dr. Sugden and his colleagues have used dominant negative derivatives of the EBNA1 protein encoded by EBV to show that inhibiting EBNA1 in Burkitt Lymphoma tumor cells drives the loss of the viral genomes leading to death of the tumor cells.  Based on these findings they have established screens to identify small molecule inhibitors of EBNA1, screened more than 410,000 compounds, and have two leads they are pursuing.  Much of this work was conducted by a postdoctoral fellow who is now a research scientist at the Promega Corporation.  Drs. Sugden and Johannsen collaborate extensively to study the mechanisms of transcription during EBV’s lytic phase. He also collaborates with Drs. Ahlquist, Kenney, Mertz and Lambert. Dr. Sugden is the Associate Director for Faculty Development and Education within the University of Wisconsin’s Comprehensive Cancer Center. His lab is supported primarily by the Tumor Virology P01 (leader of Project 3).